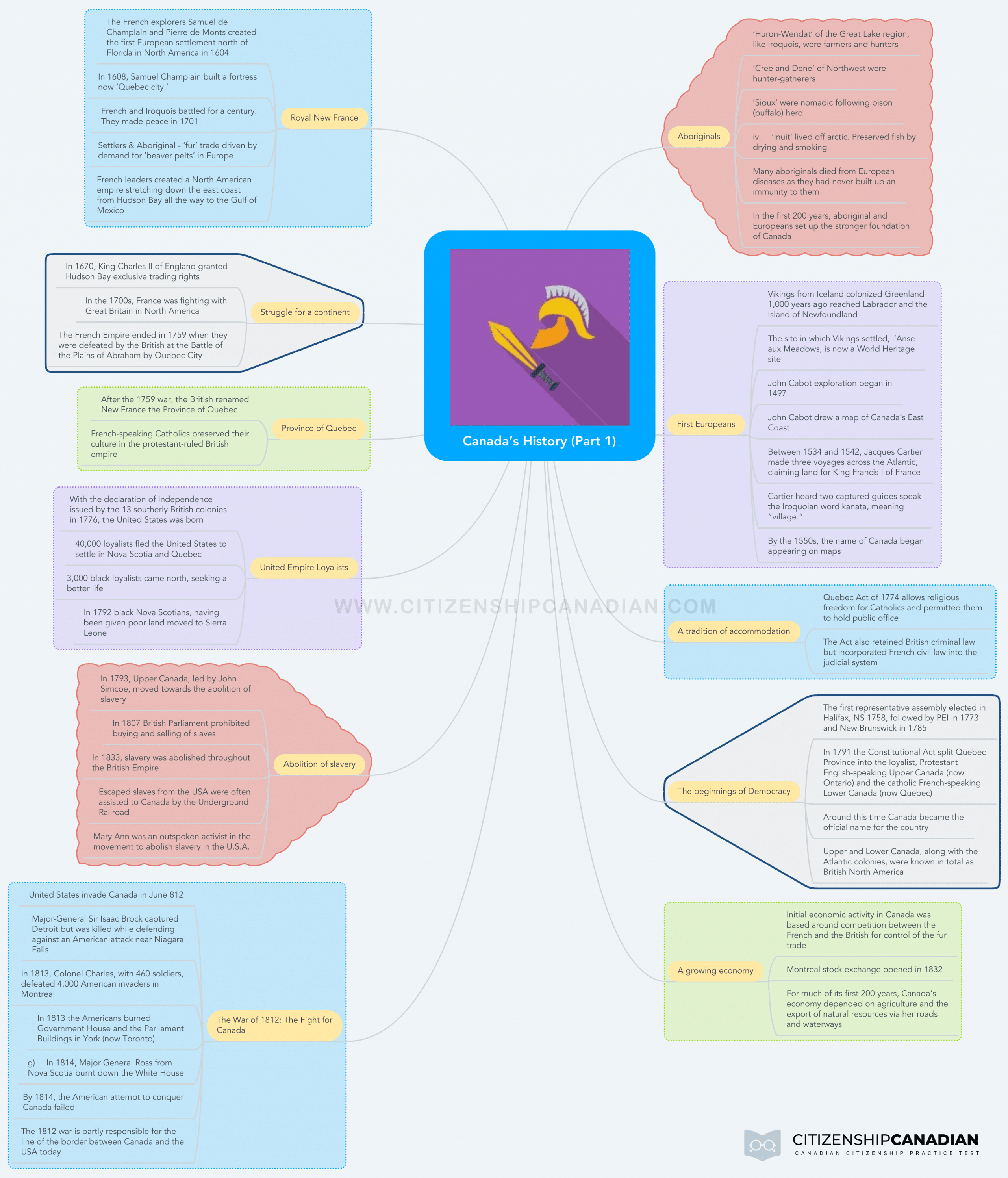 1 Aboriginals
1.1 ‘Huron-Wendat’ of the Great Lake region, like Iroquois, were farmers and hunters
1.2 ‘Cree and Dene’ of Northwest were hunter-gatherers
1.3 ‘Sioux’ were nomadic following bison (buffalo) herd
1.4 iv. ‘Inuit’ lived off arctic. Preserved fish by drying and smoking
1.5 Many aboriginals died from European diseases as they had never built up an immunity to them
1.6 In the first 200 years, aboriginal and Europeans set up the stronger foundation of Canada

2 First Europeans
2.1 Vikings from Iceland colonized Greenland 1,000 years ago reached Labrador and the Island of Newfoundland
2.2 The site in which Vikings settled, l’Anse aux Meadows, is now a World Heritage site
2.3 John Cabot exploration began in 1497
2.4 John Cabot drew a map of Canada’s East Coast
2.5 Between 1534 and 1542, Jacques Cartier made three voyages across the Atlantic, claiming the land for King Francis I of France
2.6 Cartier heard two captured guides speak the Iroquoian word Kanata, meaning “village.”
2.7 By the 1550s, the name of Canada began appearing on maps

3 A tradition of accommodation
3.1 Quebec Act of 1774 allows religious freedom for Catholics and permitted them to hold public office
3.2 The Act also retained British criminal law but incorporated French civil law into the judicial system

4 The beginnings of Democracy
4.1 The first representative assembly elected in Halifax, NS 1758, followed by PEI in 1773 and New Brunswick in 1785
4.2 In 1791 the Constitutional Act split Quebec Province into the loyalist, Protestant English-speaking Upper Canada (now Ontario) and the catholic French-speaking Lower Canada (now Quebec)
4.3 Around this time, Canada became the official name for the country
4.4 Upper and Lower Canada, along with the Atlantic colonies, were known in total as British North America

5 A growing economy
5.1 Initial economic activity in Canada was based around a competition between the French and the British for control of the fur trade
5.2 Montreal stock exchange opened in 1832
5.3 For much of its first 200 years, Canada’s economy depended on agriculture and the export of natural resources via her roads and waterways

6 The War of 1812: The Fight for Canada
6.1 United States invade Canada in June 812
6.2 Major-General Sir Isaac Brock captured Detroit but was killed while defending against an American attack near Niagara Falls
6.3 In 1813, Colonel Charles, with 460 soldiers, defeated 4,000 American invaders in Montreal
6.4 In 1813 the Americans burned the Government House and the Parliament Buildings in York (now Toronto).
6.5 g) In 1814, Major General Ross from Nova Scotia burnt down the White House
6.6 By 1814, the American attempt to conquer Canada failed
6.7 The 1812 war is partly responsible for the line of the border between Canada and the USA today

7 Abolition of slavery
7.1 In 1793, Upper Canada, led by John Simcoe, moved towards the abolition of slavery
7.2 In 1807 British Parliament prohibited buying and selling of slaves
7.3 In 1833, slavery was abolished throughout the British Empire
7.4 Escaped slaves from the USA were often assisted to Canada by the Underground Railroad
7.5 Mary Ann was an outspoken activist in the movement to abolish slavery in the U.S.A.

8 United Empire Loyalists
8.1 With the declaration of Independence issued by the 13 southerly British colonies in 1776, the United States was born
8.2 40,000 loyalists fled the United States to settle in Nova Scotia and Quebec
8.3 3,000 black loyalists came north, seeking a better life
8.4 In 1792 black Nova Scotians, having been given poor land, moved to Sierra Leone

10 Struggle for a continent
10.1 In 1670, King Charles II of England granted Hudson Bay exclusive trading rights
10.2 In the 1700s, France was fighting with Great Britain in North America
10.3 The French Empire ended in 1759 when they were defeated by the British at the Battle of the Plains of Abraham by Quebec City

11 Royal New France
11.1 The French explorers Samuel de Champlain and Pierre de Monts created the first European settlement north of Florida in North America in 1604
11.2 In 1608, Samuel Champlain built a fortress now ‘Quebec city.’
11.3 French and Iroquois battled for a century. They made peace in 1701
11.4 Settlers & Aboriginal – ‘fur’ trade driven by demand for ‘beaver pelts’ in Europe
11.5 French leaders created a North American empire stretching down the east coast from Hudson Bay all the way to the Gulf of Mexico

1 Rebellions of 1837–38
1.1 Armed uprisings took place in 1837 – 38 in Toronto and outside Montreal
1.2 Lord Durham suggested that ‘Upper and Lower Canada be merged to form a responsible government.’
1.3 Sir Etienne Tache, Sir George Cartier, and Sir John Macdonald became the Father of Confederation

3 Challenge in the west
3.1 In 1869, the Hudson’s Bay Company ceded the whole of Northwest Canada to the new Dominion, but without consulting the 12,000 Métis who lived on the Red River
3.2 This provoked an armed rebellion led by Louis Riel, who captured the territory’s capital, Fort Garry
3.3 In 1870, Fort Garry was retaken by Canadian soldiers, and Riel escaped to the USA
3.4 The Prime Minister created the Northwest Mounted Police (NWMP) in 1873 to bring peace to the west

5 Between the wars
5.1 The stock market crash in 1929
5.2 In 1933 unemployment in Canada was 27%
5.3 In 1934, the government created the Bank of Canada to help control and stabilise the country’s finances
5.4 Canada turned away numerous refugees, including Jews who were trying to escape Nazi Germany

6 Women get the vote
6.1 Women’s suffrage movement: an effort by women to achieve the right to vote
6.2 This movement was founded in Canada by Dr. Emily Stowe
6.3 Manitoba was the first province to allow women the vote in 1916
6.4 In 1917 government agreed to allow females to vote in federal elections
6.5 In 1918, most Canadian female citizens over the age of 21 were granted a right to vote
6.6 Quebec did not grant women the vote in provincial elections until 1940

8 The Second World War
8.1 The second world war began in 1939 when Hitler invaded Poland and most of Europe
8.2 More than 1 million Canadians served in World War II
8.3 44,000 Canadians lost their lives.
8.4 Canadians put up a brave resistance against the invasion of Hong Kong by Japan in 1941
8.5 During the Battle of Britain, many airmen of the Royal Canadian Air Force (RCAF) participated
8.6 When the Second World War came to an end, the Canadian Navy was the third biggest in the world
8.7 The government of Canada confiscated the properties of Japanese Canadians. Formally apologized in 1988 and compensated victims

9 The First World War
9.1 Britain declared war on Germany in 1914 as a result of the German invasions of Belgium and France.
9.2 Ottawa formed Canadian Expeditionary forces (Canadian corps)
9.3 More than 600,000 troops served in the war, out of a total population of 8 million
9.4 The Canadian Corps participated in the operation to capture Vimy Ridge, suffering 10,000 deaths and injuries
9.5 This event is still commemorated on April 9, Vimy Day
9.6 Gen Sir Arthur Currie, the most notable military man in Canada’s history

10 A Railway from Sea to Sea
10.1 British Columbia joined Canada in 1871 after Ottawa promised to build a railway to the west coast
10.2 The railway was built with finance from Britain and America
10.3 Workers were mainly European and Chinese
10.4 Subsequently, the Chinese were discriminated against, e.g., made to pay a Head Tax
10.5 The Canadian government issued an apology for this policy in 2006

13 Confederation
13.1 From 1864 to 1867, representatives of Nova Scotia, New Brunswick, and the province of Canada worked to establish a new country.
13.2 The Fathers of Confederation established the Dominion of Canada on July 1, 1867
13.3 British Parliament passed the ‘British North America Act 1867.’
13.4 Up until 1982, July 1 was known as “Dominion Day,” although it is now celebrated as Canada Day